The Boat
and its Builders

The SeaHawk is a seventeen foot glass fibre yacht, with a drop keel and sail area of up to about 168 sq.ft. The yacht was available in two and fourth berth versions and has a large cockpit, more than enough room for four large adults, making her an ideal day boat too!

She was designed for coastal cruising and examples can be found all around the coast of the British Isles and most parts of the European mainland, particularly Holland. The SeaHawk is equally at home on inland waters, and is especially popular on the Norfolk Broads, where the bulk of production took place. Owners have also contacted the site from as far away as the USA, the Canary Islands and Australia. 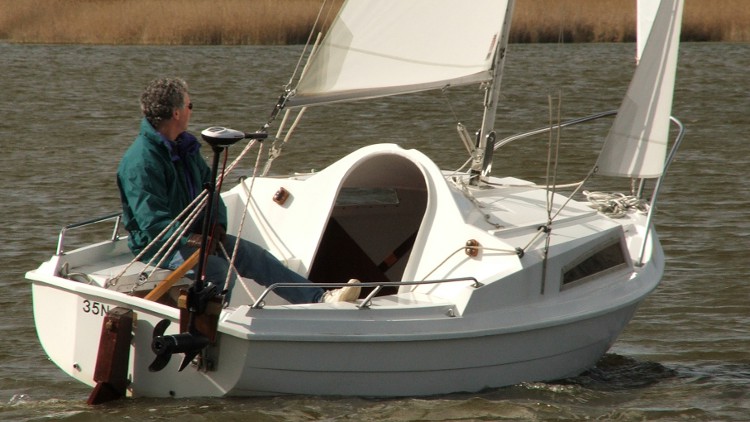 SeaHawks were built in England between 1969 and 2004, initially by Reedcraft Ltd, who held a press launch in February 1970. R. Moore & Son (Wroxham) Ltd took over production at their works in Station Road, Wroxham in 1977.

After Moores ceased trading in 1998, a further handful of boats were built by Mistral Craft of Bridge Street, Loddon. Pyefleet Boat Sales of Crouch Street, Colchester, then took over responsibility for production and the moulds moved to Essex. However, it is not clear if they actually made further boats or only sold those already built by Mistral Craft.

The moulds were then bought by Sam Watson, who was initially considering re-starting production, and it was he who built the final boat. That example was sold incomplete in August 2005 and not launched until Sunday 17 April 2010 at Brightlingsea in Essex.